Many who saw the picture easily identified the Mahindra Tractor in the Oscar Winning Korean movie, directed by Lee Isaac Chung.

This all began when Europe West Joint Secretary Sandeep Chakravorty (Ministry of External Affairs) shared a picture from a movie on which the Mahindra tractor featured.

After that, netizens didn't keep calm, and they rained tweets. Those who saw the picture recognized the movie Minari, a Korean film directed by Lee Isaac Chung. Starring Youn Yuh Jung and Steven Yeun, the film was nominated for six Oscar nominations, including Best Picture. Yuh Jung Youn is the first actor who won the Academy Award for this movie.

Siddhartha Basu, a television producer and director, also shared the picture still from the movie and tagged Anand Mahindra, chairman of Mahindra Group. 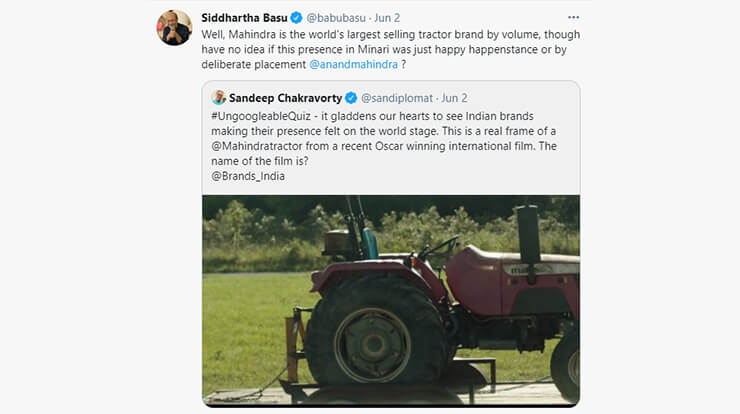 He Tweeted, "Well, Mahindra is the world's largest selling tractor brand by volume, though have no idea if this presence in Minari was just happy happenstance or by deliberate placement @anandmahindra,"

Anand Mahindra replied to Basu's tweet, and He came to know about the appearance of the Mahindra Tractor in an Oscar Winning Movie through one of the board members. 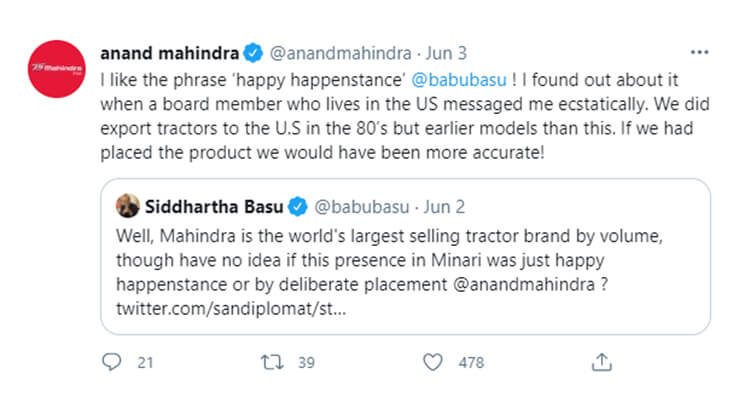 He responded, "I like the phrase 'happy happenstance' @babubasu! I found out about it when a board member who lives in the US messaged me ecstatically. We did export tractors to the U.S in the 80's but earlier models than this. If we had placed the product, we would have been more accurate!"