Riding on the back of two high growth years, the Indian tractor Industry is pegged to grow between 8-10 per cent in 2018-19.

The forecast of a normal monsoon by the India Metreological Department has set the ball rolling further with a positive outlook in the agricultural sector, which is expected to keep the market sentiment positive.

Though general productivity improvement in the agri sector will be witnessed in FY19, the double-digit run in the tractor market may not sustain as farmers are unable to generate money, TR Kesavan, president of the Tractor Manufacturers Association (TMA) told ETAuto.

So what will be the key growth drivers in FY19?

The positive market sentiment will trigger replacement demand with farmers exchanging old tractors for newbies. The 41-50hp segment that holds a 50 per cent share of the market will be the engine of growth, followed by the 31-40hp product range with a 34 per cent share.

However, the tractor industry is not expected to witness any major product launches over the next 2 years, due to the transition to the new emission regime by 2020.
At present, the tractor industry follows the Trem3A emission norms with Trem4 to come into force in 2020. Kesavan said that TMA is pushing for the new emission norms, to delay adoption till 2022, as it would spike up farmers costs.

In addition, availability of diesel at the point of use for a thorough testing of the products in the field will be required to eliminate problems at farmers' end.

TMA is currently in talks with the ministry of Road Transport & Highways for it. The tractor manufacturers maintain they have the technology for the new emission norms as they are already exporting tractors with Trem4 but this technology has to be extensively tested across 2 years to find out its usefulness in the Indian conditions as well.

Among other growth drivers for the tractor sector will be the regions, where tractor density has not been high and that have started showing signs of revival. For instance, Jharkhand, Telangana, Haryana as well as some pockets in the North and Punjab that are experiencing growth. Though the tractor market has faced low sales numbers in Maharashtra, it is set to recover during this fiscal.

Laggards remain Rajasthan as well as Madhya Pradesh, where rainfall has played truant and crops have not drawn good prices.

“This year we are bullish of rain being widespread and at the right time,” said Kesavan.

Supplementation of tractor usage with non-agri operations like haulage for construction activities as infrastructure development picks up steam pan-India, coupled with easy financing options, and various government support programmes will also give a boost to the domestic tractor market, pointed out  Anupama Arora, VP & Sector Head- Corporate Ratings, ICRA. The financing availability, a key demand driver, is also expected to remain healthy over the short to medium term, led by a relative moderation in delinquencies in the current fiscal.

At present about 60 per cent of tractor financing is extended by private players due to which portfolios are healthier. The government pitches in with 15-20 per cent of funds. At a rough estimate, for a ticket size of Rs 5 lakh per tractor, 80-90 per cent of loans can be availed depending on the risk profile and net worth of the farmer.

The state governments have also been extending subsidies for tractor purchases to farmers. But the TMA official stand is to eliminate subsidies as it upsets the complete apple cart. The volumes covered are not large and farmers tend to wait for subsidies and may finally end up with not receiving them. For instance, 400,000 farmers waiting for 50,000 tractors to be given as subsidy. Kesavan suggested that farmers below the poverty line be covered under the subsidy scheme, for which a lottery system should be adopted.

But Rajesj Jejurikar,, President -Farm Equipment, Mahindra & Mahindra felt that subsidies act as a catalyst in helping farmers in pre-poning buying decisions for tractors and implements, increasing mechanisation in the country. 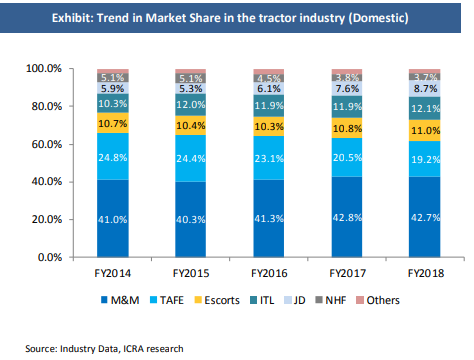 The largest tractor maker M&M is eyeing a growth of 8-10 per cent during this fiscal in the domestic market on the back of technology products that would give a fillip to its farm machinery business.

“With our investment in strategic alliances with Mitsubishi Agri Machinery in Japan, Sampo Rosenlew in Finland and Hisarlar and Erkunt in Turkey, we are serious about extending our farm implements business sain Jejurikar ,Mahindra and  Swaraj are both expected to launch new 4WD tractors in CY2018.

Tractors & Farm Equipment (TAFE), on the other hand, is gunning for a 20 per cent growth in FY19 and is mulling for a new product range across segments.

The company is expanding its Turkey plant and the recent acquisition of Serbian tractor maker IMT will further enhance its business and will contribute towards a 15 per cent productivity improvement, maintained officials.

Further, exports of the Indian tractor industry are pegged to grow at 15 per cent during the current FY, with Africa being an important market for the Indian products both in the above 50hp and 75hp range. For TAFE, Turkey, where it has its own manufacturing facility, as well as the US and South America are pitted to grow extensively.

The Indian tractor industry is believed to be among the largest tractor markets in volume terms, contributing 35 per cent of the global volumes. The total volumes globally (excluding India) grew at 3 per cent in 2017, while the Indian industry saw a spike of over 20 per cent.