Escorts’ managing director Nikhil Nanda is thanking the skies. An above normal monsoon after two consecutive deficit years has revived demand for tractors, which brings 80 per cent of his company’s annual revenues of Rs 3,500 crore. The optimism drove his company’s share price to more than double since February this year. But, last week, there was a new trigger and it took the stock price to a new high of Rs 305, up 177 per cent from the price six months ago.

Nanda decided to sell off his auto component business to Pune-based Badve Engineering. This segment had contributed Rs 92 crore in revenue last year, less than three per cent of total revenues. The component business was on a decline and was making losses.

“The automobile business was contributing below Rs 100 crore and had been making losses for last few years. The decision will free up about 120,000 sq ft of area in our plant. This can be used for one of the core businesses that will bring larger returns,” said Nanda. The Nandas have exited other businesses in the past including telecom and health care. 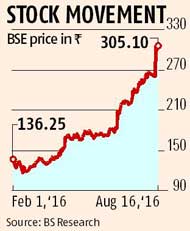 The focus is showing some initial results. Last month, Escorts sold more tractors than Sonalika to occupy the third position (after M&M and TAFE) in the domestic tractor market. “We reclaimed the third position after a gap of more than one year. We are confident of incremental growth in market share and look to stay at number three,” said Nanda. Escorts sold 16,190 tractors in domestic market during April-June quarter of FY17, growing 11.3 per cent year on year.

Not only are tractor volumes rising but margins are also moving northward. The Ebit (earnings before interests and taxes) margin grew to 11.3 per cent in Q1 against 9.2 per cent in the same quarter last year helping Q1 profit grow 33 per cent to Rs 47 crore. “I expect the industry to grow at 8-12 per cent this year. We will grow in line with the industry if not higher,” said Nanda.

The construction equipment division contributes 14 per cent to the revenue. While margins here are negative, it is seeing a bigger growth than tractors. In Q1, volumes went up by 45 per cent to 739 units. “We are seeing major revival in the tractor and construction businesses”. The railway business is the smallest but is most profitable with margins of over 17 per cent.

Nanda said the company has seen a consecutive upgrade in ratings year after year. “We have a comfortable financial position and cash flows have improved due to revival of monsoon,” said Nanda. Ace investor Rakesh Jhunjhunwala has raised his stake in the company over last one year and now owns about 10 per cent of shares (according to company filing for quarter ended June 30, 2016) and is sitting on large gains.

“The stock price is a reflection of the mood of a well prepared company that has worked hard for last four-five years and is ready for a transformation,” said Nanda.