Anand Mahindra Makes His Mark in India and Abroad

Anand Mahindra’s story is deeply entwined with that of modern India, which has transformed itself in the past 25 years from an impoverished nation into the world’s third-largest economy, by purchasing-power parity.

The charismatic chairman of the privately held Mahindra Group, Mahindra, 61, has stayed a step ahead of his country’s evolution, embracing globalization, entrepreneurship, and socially responsible policies to revive the once-sleepy industrial firm his grandfather co-founded in 1945. Today, Mumbai-based Mahindra Group is a sprawling federation of 154 subsidiaries, with interests ranging from aerospace and finance to resorts and technology. It operates in more than 100 countries and generates about $18 billion in annual sales.Mahindra & Mahindra (ticker: MM.India), the group’s flagship company, is the world’s largest tractor maker by volume and one of India’s largest auto makers. It generates more than a third of the overall group’s revenue.

After India won its independence from Britain in 1947, the government created a planned economy, allowing only designated companies to make certain goods. Mahindra & Mahindra, then primarily a jeep- and tractor-assembly company, was a beneficiary of that policy and enjoyed a cozy existence for decades. But that left it ill-equipped to handle the competition that arrived following India’s economic liberalization in the early 1990s.

MAHINDRA, WHO STUDIED film at Harvard University and earned an M.B.A. at Harvard Business School, understood the challenge better than most. After returning to India in 1981, he joined the family’s specialty steel business and, a decade later, became deputy managing director of Mahindra & Mahindra. Intellectually curious and well versed in management and corporate success stories, he helped M&M fend off larger, more technically savvy rivals.

To boost the company’s competitiveness, Mahindra focused on improving efficiency. He took aim at workers’ sacrosanct annual bonuses, tied to India’s Diwali holiday, and linked the payments more closely to productivity. That earned him death threats, but it revolutionized Mahindra’s culture, paving the way for the company to grow into a global player whose cars are now sold in Europe, Africa, and Latin America, and whose tractors are increasingly popular on U.S. farms.

“Great leaders have to be able to look through a microscope to deal with today’s issues, and through a telescope to position for the future, and he has been able to do both well,” says Vijay Govindarajan, a professor of international business at the Tuck School at Dartmouth College. 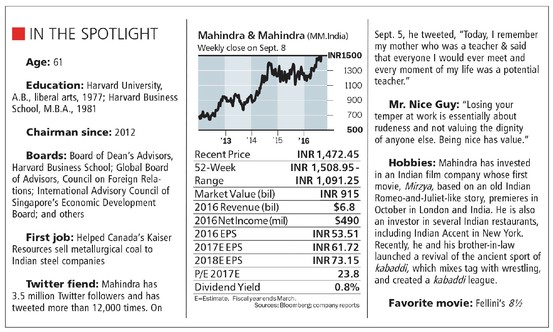 Mahindra was named vice chairman of Mahindra & Mahindra in 2003 and chairman of Mahindra Group in 2012, succeeding his uncle, Keshub Mahindra, then 88. (Like many Indian companies, Mahindra Group doesn’t use the chief executive officer title.) Under the younger Mahindra’s leadership, the parent company expanded across industries and geographies, and built upon its reputation, especially in the developing world, as a quality brand. “The Mahindra brand spelled trust, and could lend itself to new businesses in emerging economies, where there were many fly-by-night operators,” Mahindra says.

Recognizing investors’ disdain for conglomerates, Mahindra organized the family’s growing empire as a loose federation of companies that operate independently, each with its own balance sheet and cash flow, a model similar in structure to Warren Buffett’sBerkshire Hathaway (BRK.A). Mahindra hired veteran executives, often from large companies in other industries, hoping they would bring a fresh perspective to the business, and gave them autonomy. More than 80 acquisitions in the past decade have helped to underpin the group’s growth.

His job, he says, is to hold things together and lay out a strategic path for the group. In doing so, colleagues say, Mahindra has created a culture that pays heed to mavericks and encourages employees to push boundaries. The Scorpio sport utility vehicle, introduced in 2002, is a product of that culture; it was designed in-house, a first for an Indian company at that time, and became the country’s best-selling SUV for several years. Today, the brand is sold around the world, except in North America.

Mahindra Group’s business model has produced impressive financial results. Stand-alone sales at Mahindra & Mahindra more than quadrupled in the 10 years that ended in March, to $6.8 billion. Profits nearly quadrupled in that span, to $490 million, and the shares, listed on the Bombay Stock Exchange, returned an average of 18% a year in local currency, beating the Indian market by seven percentage points. (They gained 14% a year in dollars.)

The past few years have been a slog, given a sluggish Indian economy, one of the country’s worst droughts, the commodities bust, and increasing competition in the auto business. But as Nick Niziolek, manager of the Calamos Emerging Market Equity fund, a Mahindra & Mahindra holder, notes, the company has cut costs and boosted productivity, thereby maintaining a high-single-digit return on capital despite declining sales.

MORE RECENTLY, the outlook has brightened as the Indian economy has improved. New vehicle models, including the KUV100 mini SUV, introduced earlier this year, have drawn strong interest and could give a boost to sales. Mahindra also is finding new ways to market the brand. For instance, Mahindra & Mahindra has organized trips for its SUV and jeep customers to exotic locales such as the Himalayas and Indian coffee plantations, feeding the growing demand for new experiences among India’s rising affluent population.

The bigger challenge, says the chairman, is preparing for the future of mobility, which will include electric cars and more car-sharing services like Uber. M&M purchased Reva, a maker of compact electric vehicles, in 2010, but struggled with Reva’s G-Wiz vehicle, which was plagued by safety issues and poor craftsmanship. Mahindra overhauled production and created a safer version, the e20, with airbags and antilock brakes.

The company introduced the e20 in India in 2013 and in the United Kingdom this summer, where it is sold online to keep costs down. Sales have been scant so far, albeit sufficient to give Mahindra a foothold in the electric-car market. Earlier this year, Mahindra also launched the GenZe, an electric scooter aimed at U.S. commuters that is designed and produced in the U.S.

Mahindra has no shortage of ideas for the business, although not all have been winners. The company has struggled to crack the U.S. auto market, scrapping plans to launch a diesel pickup in 2012 that left it embroiled in litigation with prospective distributors. Analysts say M&M underestimated the costs and challenge of meeting safety and emission targets, and was hurt by the financial crisis. M&M has no immediate plans for a U.S. vehicle launch, although it remains interested in pursuing the U.S. market.

The tech company’s shares returned 25%, on average, in the past five years, double the market’s return, although the stock has fallen 14% in the past year as companies have curtailed tech spending. The financial-services business has fared better, with shares rising 43% in the past year, helped by an improving economy.

MAHINDRA IS AN INFORMAL, accessible boss who travels without handlers and manages his own schedule and Twitter account. He has become a regular on the “big think” circuit, attending the World Economic Forum’s annual meeting in Davos, Switzerland, and sitting on a range of business and government councils around the world. He also comments frequently about social ills, and donated $10 million in 2010 to create a humanities center at Harvard, citing a need for businesses to be informed by social responsibility.

“Anand isn’t driven by the urge to accumulate,” says Vikram Mehta, a Mahindra & Mahindra board member and former chairman of Shell India. “His contributions aren’t compelled. His commitment to social causes is driven by his strong desire to shift the needle on social welfare.”

Doing business in India, a country renowned for corruption, has never been easy, but Mahindra applauds the reforms Prime Minister Narendra Modi has implemented since taking office in 2014. “Modi has taken a number of small steps that aren’t glamorous, but are like a Roomba vacuum moving around the house,” he says. “It doesn’t make a giant sucking sound like a Hoover, but cleans things up and makes the house a better place to live.”

Specifically, Mahindra praises the creation of an electronic market that allows farmers to sell crops directly to wholesalers, increasing transparency and yielding higher prices. Although Modi backed away from support of land reforms that would have allowed businesses to buy farmland for infrastructure or industrial projects, Mahindra approves of a move to turn the issue over to India’s states, allowing the more reform-minded to chart their own course on an issue that could boost economic growth.

AS FOR MAHINDRA GROUP’S goals, global expansion is a priority. The company already generates about 40% of sales outside of India, and that figure could climb in coming years. New business lines are also on the drawing board. The chairman would like to see Tech Mahindra, for instance, move beyond the sale of back-end software and into new product and services start-ups, especially in networking and communications.

Mahindra also wants to build on the company’s reputation as “entrepreneurs who do good, even as they do well.” Mahindra Rural Housing Finance, for example, is striving to serve India’s vast unbanked population. The company sends workers to farflung locales to disburse loans, charging rates that are higher than a typical bank’s but much lower than those of the moneylenders common in rural areas. “It’s not how big you become, but how you become big,” Mahindra says.